The BBC has released more details on the return of Tom Baker to the role of the fourth Doctor after twenty eight years.

The first story, The Stuff of Nightmares, will be available to buy from 3rd September 2009 with the remaining four stories following in subsequent months.
As well as being available on CD, the series will be available for download from audible.co.uk
Writer Paul Magrs said,
'This is the first adventure with the Tom Baker Doctor since Logopolis. And it feels fantastic to write for him. I would say he's a brilliant mixture of everything the Fourth Doctor ever was. He's dark and sombre at times; other times he's gleefully macabre and mischievous.'
To support the series a dedicated webpage will launch on 10th August. The page will contain exclusive content and material such as a Q&A with Tom Baker, photographs from the recordings, audio clips and a poll on Tom’s best moments as the Doctor.

Doctor Who: Hornet's Nest – The Stuff of Nightmares
Responding to an advert apparently worded for him alone, Captain Mike Yates (retired) is reunited with a ghost from the past. But why has the Doctor, that mysterious traveller in Time and Space, sent for his former UNIT acquaintance?

Trapped by a horde of vicious creatures in an apparently innocuous English country cottage, the two old friends are on the brink of an enormous adventure.

As the Doctor relates his recent escapades, it becomes clear to Mike that they – and the Earth at large – are facing an enemy of unimaginable power and horrific intent. The nightmare is only just beginning. 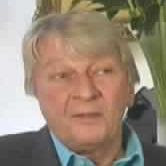 Summerton started out in the theatre and then moved to television with a role in the BBC Soap Compact; he then went on to play one of the very first Daleks to appear in Doctor Who.

In later life he became an agent, running his own company Michael Summerton Management Ltd which specialises in choreography and dancing, and was notable is being the agent for Arlene Phillips and Bruno Tonioli, both featuring as judges in the popular BBC series Strictly Come Dancing.

From The Telegraph Obituary:
His agent told him he would not need to learn any lines for the casting, and when he arrived at the BBC workshops he was asked to strip down to his underpants and sit in what appeared to be a tub on castors. Summerton (who was one of the four original Daleks) was instructed in how to move this apparatus about, the director saying: "We want to test this prototype for manoeuvrability. We want you to move forwards, backwards, sideways. Quickly, slowly." Presently the director lowered a lid over him with a plunger sticking out of it. Summerton found himself in total darkness. He would later relate: "When the lid went on I knew my career as an actor was over."
Tweet
FILTER: - People - Obituary - Classic Series

The British Board of Film Classification has cleared the extras for the forthcoming release of The Dalek War box set, comprising of the Third Doctor stories Frontier in Space and Planet of the Daleks.
Items include
No official release date has been given for this set, but it is expected to be released on four discs towards the end of the year. The Doctor Who Restoration Team has an article about the preparation of the stories for DVD release.

Doctor Who has been awarded its second Guinness World Record, for Most successful sci-fi series. The award is based upon the show's perfomance in ratings, DVD and book sales, and downloading popularity.

The award was presented to Russell T. Davies by Guinness editor-in-chief Craig Glenday at the San-Diego ComicCon on Sunday. Glenday said: "It's the longest-running sci-fi show on TV. But that's not quite enough, it's too good a show to have a longest-running record. Based on things like CD sales, downloads, illegal downloads, we've realised that Doctor Who is the most successful sci-fi show on TV full stop."

The actor Harry Towb has died at the age of 83.

Towb had a long and distinguished career in British film and television appearing in many classic programmes during a career lasting nearly sixty years.

Towb had two roles in Doctor Who. He first appeared as Osgood alongside Patrick Troughton in the 1969 story The Seeds of Death. He later appeared alongside Jon Pertwee in the 1971 story Terror of the Autons where, in one of the most memorable scenes of the classic series, he was eaten by a plastic chair.

John Simm returns as the Master 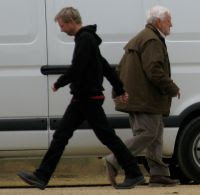 Photo courtesy Alun Vega
The official BBC Doctor Who site has confirmed that actor John Simm will be reprising his role as The Master in the forthcoming Christmas specials. Though no other details have been confirmed the site reports that they will publish an interview with Simm later in the year.

The announcement follows a special preview shown at the San Diego Comic Con, during which the character appeared with other known cast members for the episodes (Bernard Cribbens, Catherine Tate). It also confirms reports of the actor seen on location during filming for the episodes back in March/April this year.

No name has been given for the episodes so far, though Den of Geek have suggested that it might be called "The End of Time".

Update: a new BBC website article reports that as well as John Simm, Alexandra Moen will also be reprising her role as Lucy Saxon, the Master's wife from his previous appearance.
Tweet
FILTER: - People

The official BBC Doctor Who website has put online, for UK users only, the new trailer for the next special episode starring David Tennant as the Tenth Doctor. The Waters of Mars is due to be broadcast in the UK this autumn, and the new trailer was shown to an enthusiastic audience at the ComicCon convention in the United States yesterday.

The UK media website Digital Spy has published a summary of today's Doctor Who discussion panel at the ComicCon event in San Diego, which featured Russell T Davies, David Tennant, Julie Gardner and Euros Lyn discussing their time working on the programme, taking questions from the audience and previewing the forthcoming special episodes.

Among the topics raised was the possibility of a Doctor Who feature film, which the panel stated is not a project on which any of them are currently working. The panel also featured a presentation from Guinness World Records, declaring Doctor Who to be "the most successful sci-fi show on TV full stop".

The comics news site ComicMix is reporting that an unnamed BBC America executive at ComicCon has confirmed that the BBC has ordered a fourth series of Torchwood. There is as yet no independent confirmation of this; however, a Torchwood panel is scheduled at ComicCon tomorrow, with star John Barrowman, writer/executive producer producer/show creator Russell T Davies, executive producer Julie Gardner and director Euros Lyn. Presumably, if the report from ComicMix is correct, the news will be confirmed at this panel.


(Thanks to poster "InigoMontoya" from Gallifrey Base.)
Tweet
FILTER: - Torchwood - Russell T Davies

The science-fiction website io9 has posted a report of the roundtable discussion Russell T Davies, Julie Gardner, Euros Lyn and David Tennant took part in on Saturday at the San Diego ComicCon event in the United States. There to promote the forthcoming specials that will see out Tennant's time as the Tenth Doctor, the group discussed the future of Doctor Who with journalists, and io9's full report contains some casting spoilers for the forthcoming two-part finale to Tennant's time in the TARDIS.

Apparently debunked by the group is the idea that a Doctor Who feature film is to be announced at the ComicCon event.