He talked about Doctor Who, Torchwood and The Sarah Jane Adventures.

The programme can be heard on the BBC iPlayer for the next six days.
Tweet

The new edition of the Radio Times has been published in the UK, and features a foldout cover for Torchwood: Children of Earth. The magazine includes a four-page article on the five-part story, including a "script-to-screen" section.

There is also an interview with John Barrowman, in which he criticises the BBC for cutting the series to five episodes following its move to BBC1.

Barrowman said: "We were the most successful show on BBC3, ever. We moved to BBC2 because the ratings were so good, the ratings were great again and we were beating shows that had been on BBC2 for a long time. The decision was made to go to BBC1, and then we were cut. From 13 episodes down to five.

"The five episodes, the miniseries as I call it, are incredible, I have no doubt about that, but personally, I felt like we were being punished. Other shows move from BBC3 and 2 to 1, and they don't get cut. So why are we? It felt like every time we moved we had to prove ourselves."

A BBC spokesman has denied Torchwood was being "punished", saying they wanted to create an "event" to launch the show on BBC1, with the new series stripped across one week.

"They are faced with their fiercest threat to date – one which throws the future of Torchwood and the entire human race spiralling into danger. Do they stand a chance of saving mankind?" Even if you've never seen Torchwood in your life, the brief description from its official website should at least make it clear that Last of the Summer Wine this is not.

"But it will be a new experience for die-hard fans, too: as well as moving to primetime BBC1 from BBC2, it's also switched from the usual 13-part weekly format to five parts to be run on consecutive nights.

"It's a trick that's been used to good effect before – last year's Criminal Justice and the recent Occupation, for example – and it's something we can expect more of. As increasing numbers of us watch what we like, when we like, 'event TV' will be needed to ensure we keep having compelling reasons to tune in on particular nights.

Not that Torchwood star John Barrowman is entirely happy. Find out why – and what it takes to produce a a drama like this – on page 14."
Tweet

Starring John Barrowman, Eve Myles and Gareth David-Lloyd the 45 minute plays will be transmitted at 2.15pm on Wednesday, Thursday and Friday. Once transmitted they can be downloaded from the BBC iPlayer for a period of 1 week.

Asylum Wednesday 1 July 2009
When PC Andy arrests a teenager for shoplifting, he thinks it is going to be a routine case. Then he sees the weapon she is carrying and decides to call in the Torchwood team.
By Anita Sullivan.

Golden Age Thursday 2 July 2009
The Torchwood team are led to Delhi on the trail of a dangerous energy field.
By James Goss.

The Dead Line Friday 3 July 2009
When a Cardiff hospital is inundated with patients who have fallen into coma – like trances, Torchwood move in to investigate.
By Phil Ford.
Tweet

A roundup of news for the broadcast of Torchwood: Children of Earth around the world.

Target on the Radio

In a new documentary, Mark Gatiss explores the history of the incredibly popular Target book range.

In the days before domestic video players and multi channel Television, the only way for fans to relive Doctor Who episodes, or catch up with stories they had missed, was through the hugely popular Doctor Who novelisations, published throughout the 70's and 80's.

Gatiss, a self-confessed Doctor Who fan, who has written and stared in the revived series, presents On the Outside it Looked Like an Old Fashioned Police Box. The documentary features some of the best excerpts from the books and interviews with publishers, house writers, illustrators and the actors whose adventures the books depicted.

The programme is on Radio Four on Tuesday 23rd June at 1130 BST. Radio Four can be heard across the UK and around the world via the BBC iPlayer. Once broadcast the programme will be availabe to listen again for seven days. 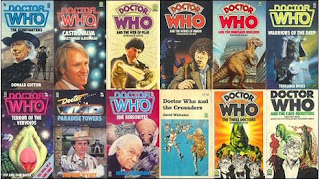 The BBC Press Office has released details for week 27, and confirms that Torchwood: Children of Earth will be broadcast during that week, 4th-10th July. The show is currently listed as "unplaced", meaning that the exact time and days have yet to be finalised.
Captain Jack Harkness, Gwen Cooper and Ianto Jones (John Barrowman, Eve Myles and Gareth David-Lloyd) return for a new adventure in Torchwood – Children Of Earth, a five-part series for BBC One.

An ordinary day becomes one of terror, as every single child in the world stops. A message is sent to all the governments of Earth: "We are coming." But, as a trap closes around Captain Jack, the sins of the past are returning and long-forgotten events from 1965 threaten to reveal an awful truth.

Torchwood is forced underground as the government takes swift and brutal action. As members of the team are hunted down, Britain risks becoming a rogue state. Meanwhile, the mysterious and powerful 456 draws ever-closer.

Captain Jack, Gwen and Ianto are helpless as events escalate to such a degree that mankind faces the end of civilisation itself.

Guest star picture on the web

Various news sources online and in print - including science-fiction website io9 and British tabloid newspaper the Sun - have in recent days been running a picture from behind-the-scenes of David Tennant's forthcoming two-part finale in Doctor Who. The image, apparently a screen grab from a video, shows Tennant along with guest star Timothy Dalton and another actor, whose presence in the story may be considered a spoiler, so his name is given in the spoiler box below.

Dalton's role in the forthcoming specials is not currently known.

The other actor pictured along with Dalton and Tennant is John Simm, who played the Master in the final three episodes of the third series of Doctor Who.

Davies and Tennant to appear at SDCC

Doctor Who spinoff Torchwood is also returning to Comic-Con, with star John Barrowman appearing on a panel also featuring Davies, Gardner and Lyn. Sharing space at that panel will be the new BBC America series, Being Human. Creator and writer Toby Whithouse plus lead actors Russell Tovey, Lenora Crichlow and Aidan Turner, talk about the inspiration for the show and what it's like to play three twenty-somethings with secret double-lives – as a werewolf, a vampire and a ghost.

Fans can visit the BBC America booth (#3629) to capture their own photograph alongside part of the Doctor Who set as well as purchase exclusive merchandise including David Tennant figures.

Also featured will be exclusive previews of the upcoming Doctor Who specials and the final episode of Torchwood: Children of Earth.

The BBC Press Office has released the official press pack for the forthcoming five-part serial Children of Earth, which forms the third series of the popular Doctor Who spin-off. The release includes information on cast and crew, as well as interviews with chief writer and executive producer Russell T Davies and cast members John Barrowman, Eve Myles, Gareth David-Lloyd and Kai Owen.

Simon Williams was 75 - 16 credits, including Gilmore in Remembrance of the Daleks

Carole Ann Ford was 81 - 47 credits, including Susan Foreman in An Unearthly ChildKenneth McMillan was 82 - credited as Film Cameraman for Planet of Evil

Michael Kilgarriff was 84 - 6 credits, including Cyber Controller in The Tomb of the Cybermen

Damaris Hayman (died 2021 aged 91) would have been 92 - credited as Miss Hawthorne in The Dæmons
Deaths
Michael Summerton (died 2009 aged 65) - 2 credits, including Dalek in The Daleks