The Next Doctor - Appreciation Index

The Next Doctor had an Appreciation Index figure of 86 making it the second most enjoyed programme on mainstream television on Christmas Day. The only programme to score higher was Wallace and Gromit: A Matter of Loaf and Death which scored 88.

The Appreciation Index, or AI, is a measure of how much the audience liked the programme. It is a score out of 100, based on responses from a carefully selected panel. The average score for drama on BBC1 and ITV1 is 77. A score in excess of 85 is regarded as excellent while a score below 60 is poor.

With overnight figures now available for the whole of Christmas week, Doctor Who stands as the second most watched programme of the week, a position it is expected to retain when BARB releases the corrected figures next week. If so this would be the fifth top five place in succession, a record for the programme.
Tweet
FILTER: - Specials - Ratings - UK - Series 4/30 Specials

The Next Doctor - reaction 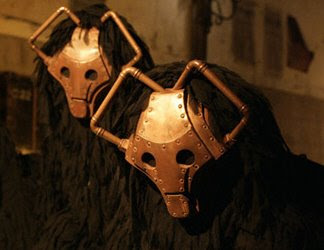 Following the broadcast of last night's Christmas special episode of Doctor Who, "The Next Doctor", on BBC One, various newspapers and websites have been publishing their reactions both to the episode itself and its high position in the Christmas viewing charts.

The Telegraph's Christmas television review praises the episode, claiming that "As Morrissey's Doctor said, it was complete and utter nonsense, but wonderful nonsense, nevertheless." In The Mirror, critic Jim Shelley wrote that BBC One's Christmas schedule as a whole "From 2pm through to 11.35pm... was perfect viewing." He wrote of "The Next Doctor" that: "David Morrissey threw himself into the part and showed that if he gets the call he has the gusto to make a classic old-fashioned Doctor Who... Up against all this, the other channels simply rolled over." TV Scoop, meanwhile, was less impressed, calling the episode "something of a swing and a miss."

The high viewing figures attained by the episode have been covered across a wide variety of media. BBC News, along with several other outlets, has ranked the Christmas Day programmes in order of peak rather than average viewing figures, placing Doctor Who third rather than second. The main thrust of most media reports of the Christmas ratings, nonetheless, is BBC One's resounding victory over their main rival, ITV1. This is the angle taken by the Daily Mail. Other outlets covering the ratings results include The Guardian, The Sun, TeleText, CBBC and Digital Spy.
Tweet
FILTER: - Specials - UK - Series 4/30 Specials - Press

The Next Doctor - Overnight Ratings

Unofficial overnight figures show The Next Doctor was watched by 11.7 million viewers, a share of 50.5 per cent of the audience.

The rating is the highest achieved by the programme in 2008 and the second highest since the programme returned in 2005, only being beaten by last year's Christmas special.

The programme was the second-highest rated of Christmas Day and of Christmas week so far, beating EastEnders, even though the soap was shown in a much later slot. The highest-rated programme of the day was Wallace and Gromit: A Matter of Loaf and Death with a massive 14.3 million watching.

BBC One ruled the day with the top seven places. The highest rating ITV1 could achieve was an average of 7.4 million for Coronation Street. Against the Doctor, Emmerdale could only manage 4.8 million viewers.

Doctor Who is now the tenth-most-watched programme of 2008, although this position could rise when final figures, including for those who recorded the programme and watched it later, are released by BARB in about two weeks' time.

On BBC3 Doctor Who Confidential had an audience of 0.46 million and Doctor Who: Top 5 Christmas Moments was watched by 0.48 million viewers. Gavin and Stacey: 12 Days of Christmas was the highest- rated programme on multi-channel television.
Tweet
FILTER: - Specials - Ratings - UK - Series 4/30 Specials

Next Special: Planet of the Dead

Confirmed on tonight's broadcast of "The Next Doctor"... the next Doctor Who special will be Planet of the Dead, starring David Tennant. It will air at Easter 2009. More details when available.
Tweet
FILTER: - Specials - Production - Series 4/30 Specials

Mad Norwegian Press has formally scheduled two books for release in May 2009.

In the About Time 3 Second Edition, Tat Wood vastly expands upon the discussion of the Jon Pertwee era of "Doctor Who," bringing this installment of the About Time series up to the size and depth of its fellows. All told, this Second Edition has nearly three times the material of its predecessor.


Many existing essays and entries have been greatly retooled, and evidence from the new "Doctor Who" series (unbroadcast when this book was first published) has been taken into account. New essays in this edition include "The Daemons: What the Hell Are They Doing?", "Where Were Torchwood When All This Was Happening?" and "Is This Any Way to Run a Galactic Empire?".

Additionally, Mad Norwegian will be releasing Wanting to Believe: A Critical Guide to The X-Files, Millennium and The Lone Gunmen by renowned Doctor Who writer Rob Shearman. In this, Shearman critiques and examines all 282 X-Files-related episodes (as well as the two motion pictures), making this text one of (if not the only) books to cover the entire X-Files TV canon.
Tweet
FILTER: - Merchandise - Books

With transmission of the latest new episode of Doctor Who, the Christmas special "The Next Doctor", due tomorrow evening on BBC One, the past few days have, as usual, seen a flurry of coverage of both the episode and the series as a whole across the UK media. As ever, these articles may contain spoilers, so do be warned before clicking on any of the links below.

The Telegraph, always keen to run Doctor Who stories in recent years, claim that David Tennant has backed the idea of Next Doctor co-star David Morrissey succeeding him in the show's lead role. Radio Times, IO9, The Mirror, The Daily Record, The Telegraph, TV Scoop and The Quietus all look ahead to "The Next Doctor", with preview features. BBC News have also run a preview on television, available to UK internet users on the BBC YouTube page. The TorrenttFreak website has an article on Australian fans getting ready to download the special online.

The idea that there could possibly be a Doctor Who musical mounted for television or theatre has excited some comment over the past few days, apparently emanating from some off-the-cuff remarks made by David Tennant. The Telegraph picks up on the idea, as does Contact Music.

Russell T Davies is interviewed by Metro, and for BBC local radio. David Tennant, meanwhile, spoke to Heart Radio this morning. Elsewhere, monster actor Paul Kasey has been interviewed by The Stage.

Thanks to PolyG, Chuck Foster and all on the media thread at the Doctor Who Forum.
Tweet
FILTER: - UK - Press 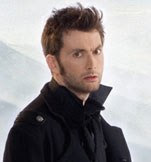 The RSC has issued a Press Release on the condition of David Tennant. The release says that Tennant is making encouraging progress following his back operation earlier this month. However it is unable to give a date for Tennant's return to the London production of Hamlet. It is still hopped that Tennant will be able to return to the role before the end of the run. Until then Edward Bennett will continue in the role.

David Tennant said " am so grateful for all the terrific medical attention I have received and although it is frustrating to have to take it easy whilst all my friends and colleagues continue at the Novello Theatre every night, I am aware that I must listen to the experts and take my time. I am impatient to be back at work and sincerely hope to make it back some time before the end of the run
I am very sorry to disappoint anyone who booked to come and see me in Hamlet, but confident that you will be far from disappointed by Edward Bennett's performance in the title role. He is one of British theatre’s most promising talents and an opportunity to see his Hamlet, alongside the brilliant ensemble of actors that I have had the great pleasure of working with all year, is very exciting."

The theatre box office is writing to all ticket holders for performances after 26th December to update them. If desired patrons can exchange their tickets for other productions in the RSC's London season at the Novello, subject to availability, or offer their tickets for resale at the Box Office, although the theatre can't guarantee this will be possible.
Tweet
FILTER: - People

Behind the Scenes of The Next Doctor

BBC One magazine programme The One Show has put online its behind-the-scenes look at The Next Doctor from last Friday.

Click here to watch the extract. (NB: May not be available to view outside the UK.)
Tweet
FILTER: - Specials - UK - Series 4/30 Specials - Broadcasting

The official BBC Doctor Who website has posted a clip from the forthcoming Christmas special, "The Next Doctor", as the treat behind the door of day 21 on their "Adventure Calendar". The calendar counts down to Christmas with a variety of special material made available each day in December.

Tshabalala Interview And Sladen In Panto

With just a few days to go now until The Next Doctor airs on BBC One, Last Broadcast has uploaded an interview with Velile Tshabalala, who plays Rosita in the Christmas special.

It was conducted last month but embargoed until now. In it, Tshabalala discusses the audition process, working with Davids Tennant and Morrissey, her costume, and performing stunts in the episode.

The actress opens in pantomime on December 20, appearing in Dick Whittington And His Cat at The Compass Theatre in Ickenham, Middlesex. The show runs until January 3.

Also in panto this festive season is Elisabeth Sladen, playing Mrs Darling in Peter Pan at the Theatre Royal Windsor. The production, based on the J M Barrie tale, is on until January 11.

With thanks to Jeremy Bentham
Tweet
FILTER: - People - UK - Press

Laurence Belcher will be 27 - 2 credits, including Young Kazran in A Christmas Carol

Sinead Keenan will be 45 - 7 credits, including Addams in The End of Time