An Adventure in Space and Time Nominated for Critics' Choice Award

The drama detailing the creation of Doctor Who, An Adventure in Space and Time, has been nominated for three prestigious Critics’ Choice Television Awards.

The drama itself is nominated in the Best Movie category, where it faces competition from an episode of Sherlock as well as another BBC biopic, Burton and Taylor.

The Critics’ Choice Television Awards honour programs and performances that aired between June 1, 2013 and May 31, and are voted for by US journalists who write about TV.

The Awards will be presented at the Beverly Hilton Hotel on Thursday, June 19, 2014 in a ceremony hosted by actor/comedian Cedric the Entertainer.
FULL NOMINATIONS

The actress Barbara Murray has died at the age of 84.

Barbara Murray appeared in Doctor Who in 1982, playing Lady Cranleigh in the story Black Orchid, alongside fifth Doctor Peter Davison.

Born in London in 1929, Murray made her stage debut in 1949 working in regional rep at the Newcastle Playhouse. Later that year she appeared in her first film, Badger’s Green before appearing as Shirley Pemberton in the classic Ealing comedy Passport to Pimlico.

Her success in the movies led to a string of roles on the small screen, where she became a familiar face, with a career spanning five decades. Some of her more memorable TV roles include parts in The Pallisers, His and Hers, Never a Cross Word, The Power Game and The Indian Tales of Rudyard Kipling.

West End appearances included the thriller Wait Until Dark , the comedy Flip Side and the play An Ideal Husband. She also appeared with Peter O’Toole in Pygmalion and opposite John Mills in Little White Lies. On Broadway she appeared briefly at the Biltmore Theatre in Leslie Weiner’s comedy about a family-run lingerie business, In the Counting House.

Barbara Murray retired to Spain where, earlier this year, she fell and broke her hip. She died in hospital May 20, aged 84.

She was twice married and divorced, and is survived by three daughters from her first marriage to the actor John Justin.
Tweet

Singer-Songwriter Foxes to appear in Doctor Who

The BBC have reported that the Grammy award-winning singer-songwriter Louisa Rose Allen, better known as Foxes, will feature in the new series of Doctor Who:

Speaking about her casting, she said:
I can't believe I'm actually going to be in an episode of Doctor Who! Especially as it all came about from a chance meeting. I was playing a gig and got chatting to the show's production team who'd been watching my performance. I was telling them how much I loved Doctor Who and next thing they invited me to be on it. I couldn't think of a better place to make my acting debut than on one of the UK's most iconic shows!
Lead writer Steven Moffat said:
We are completely thrilled that the amazingly talented Foxes is joining us on board ... well, you'll see. Let's just say, the Doctor is finally catching up on his phone calls.
The singer took time off from her UK tour for her album Glorious to undertake filming yesterday; she will also be performing a track for the series.
Tweet

The new issue of Doctor Who Magazine reveals the most popular stories of the first five decades of the series, as voted for by readers of the magazine.

Which classic twentieth-century story hits the Top Five for the first time ever?
Which adventure shoots up the list to become the top story of the Second Doctor’s era?
Which two recurring monsters see their every appearance land inside the Top 75?
Which two Doctors find an incredible 50% of their stories inside the top third of the poll?
Which adventure will be voted the greatest Doctor Who story of all time?

The answers to these questions are revealed as the magazine celebrates the Top 10 stories of each decade, from the 1960s to the 2010s – and gives the ultimate chart placing of each and every one of the Doctor’s 241 adventures to date.

Also in this issue: The Magazine, which comes with 16 extra pages and a souvenir gatefold cover, is on sale from Thursday 29 May.

Retro TV, the American network that airs classic television shows, has signed a deal with BBC Worldwide to show classic episodes of Doctor Who across the United States.

The deal will see episodes from the first thirty years of the series screened on the channel, which currently airs such classics as The Lucy Show, Petticoat Junction, The Beverly Hillbillies, Highway to Heaven, Naked City and I Spy.

The channel has a licence to show all the classic episodes that are currently available from BBC Worldwide, just under 500 in all, covering the adventures of the first seven Doctors. 695 episodes were originally made, with 97 still missing from the BBC archives after being destroyed in the 1970's.

The deal was welcomed by Matthew Golden Vice President of Production at Luken Communications.
We couldn't be more excited to make legendary classic episodes of Doctor Who available nationwide. The series is an institution, and we're proud to give fans new and old the opportunity to experience this groundbreaking series from the very beginning.
Classic Doctor Who episodes have been seen in the states on Public Television since the 1970's, and selected stories were shown on BBC America to celebrate the series 50th Anniversary.

Doctor Who will makes its debut on Retro TV this summer.
Tweet

BBC One has won the Eurovision Connect award for Best Promotion For A Fictional Programme for its work promoting Doctor Who's 50th Anniversary episode.

The award was announced at the Eurovision Connect Conference in Vienna, Austria. The conference is organised by the European Broadcasting Union and brings together about 140 professionals from public service broadcasters throughout Europe.

The Day of the Doctor was broadcast simultaneously around the world in 94 countries. It achieved the Guinness World Record for the largest ever simulcast of a TV drama.

BBC One also won the Best Promotion For An Entertainment Programme/Event for The Voice.
Tweet

Hillywood does Doctor Who

The Hillywood Show, the internet site renowned for producing parodies of big budget Hollywood movies, has turned its attention to Doctor Who. The video, created by sisters Hilly and Hannah Hindi, takes a look at life with the Tenth Doctor.
It's the DOCTOR WHO musical parody you've been waiting for! Join The Tenth Doctor, an alien Time Lord who travels through time and space in his TARDIS, in an eye-catching parody that's out of this universe. People assume that a parody is a strict progression of cause to effect, but actually, from a non-linear, non-subjective viewpoint, it's more like a big video of wibbly-wobbly, Time Warp stuff. Like the TARDIS, The Hillywood Show® makes a production that's bigger on the inside and showcases David Tennant's beloved Doctor in a memorable way. Allons-y!
Doctor Who Parody by The Hillywood Show, via YouTube
Tweet

Doctor Who return confirmed for August 2014

The BBC have confirmed that the next series of Doctor Who will have its premiere in the United Kingdom during August 2014.

No day has been specified as yet, though previous series have been known to air from Bank Holiday weekends. 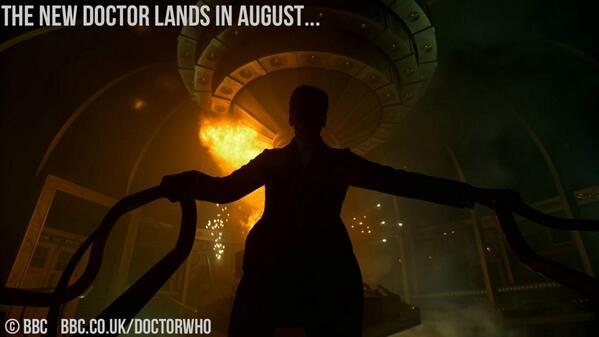 Doctor and Cyberman masks among free gifts in new DWA

Masks of the Eleventh Doctor and a Cyberman plus two badges are the free cover gifts with the new edition of Doctor Who Adventures.

Issue 346 - published today - also has 10 posters, and three of them can be brought to life via a smartphone and the free app Blippar.

The new edition also sees the start of a new series of cut-out-and-keep features called The Dalek Files, with the first one uncovering the secrets of The Cult of Skaro.

In addition, issue 346 has:Issue 346 of DWA is available until Tuesday 3rd June.
Tweet

Dual Planet are to release two albums which include music that featured in Doctor Who during the William Hartnell and Patrick Troughton eras:

A compilation of electro-acoustic and early electronic music. Compiled from series of rare electronic 78rpm 10”s, featuring music used in the 1960s Doctor Who TV Series.

Considered to be one of the pioneers of Psychoacoustics, Eric Siday is also acknowledged as a key name in the growth of 20th century electronic music. An important figure in the development of the Moog Synthesizer, Siday’s compositions were a testing ground for Bob Moog ideas, in turn shaping the technical advancement of the instrument. An early experimenter of Musique Concrete and extended technique he inaugurated these concepts into the world of television scoring and advertising. Slightly pre-dating Ron Grainer and Delia Derbyshire’s ground-breaking composition for the Doctor Who theme, he begun experimenting with electronics in soundtracks as early as 1960 carrying through to the 1970s where he created inspired electronic ‘sound logos’ for various entertainment companies such as CBS, ABC and Columbia.

Pulling together a clutch of eerie atomic-age miniatures drawn from a series of rare 10” 78rpm library discs, this compilation explores Siday’s scientific study of sound, a concept he branded ‘The Ultra Sonic Perception’. Partially used as the soundtrack to the early 1960s Doctor Who TV series, this document is an amazing insight into the early electronic music used in television as well as a showcase of the pioneering techniques used by this forward thinking composer.

A previously unreleased Doctor Who score mastered from the original tapes. Includes additional electronic tracks from Don Harper’s catalogue and music featured in George Romero’s Dawn of the Dead.

A collection of Horror-Electronics, supernatural soundscapes and sinister library muzak from Australian composer Don Harper. Centring on a previously unreleased score for the 1968 Doctor Who series The Invasion (a dark otherworldly sci-fi jazz suite) Cold Worlds is also a focus on the electronic music of this largely unsung composer. Like many Australian film composers (Ron Grainer, Dudley Simpson, Don Banks) Don Harper based himself in the UK during the 1960s and subsequently found employment at the BBC and other British film and library companies.

Probably best known for his BBC scores for World of Sport, Sexton Blake and The inside Man, Harper also immersed himself in the world of electronics. Acknowledged as a virtuoso jazz violinist, he notably produced a 1974 electronic/altered jazz session for Lansdowne Studios titled Homo Electronicus (featuring Norma Winstone and other progressive UK jazz musicians). In addition to cutting a number of library sessions for Joseph Weinburger’s Impress label, in which several tracks were later famously sampled by MF Doom, he also co-wrote the music (alongside Delia Derbyshire and David Vorhaus) for the essential Radiophonic KPM recording Electrosonic. Also, featured on this compilation are his nightmarish cues used in George Romero’s cult zombie classic Dawn of the Dead.

Track Listing:
Note: the tracks are a re-recording of the score made by Harper for the de Wolfe music library. Aside from the Doctor Who theme, the tracks from The Invasion included on this album are separate cues to those included in Silva Screen's 50th Anniversary Collection.
The albums will be released in both vinyl and CD formats, and can be ordered from their website. Some sample tracks can be heard via their Soundcloud page.

Thanks to Dual Planet we have five prizes up for grabs. In order to be in with a chance of winning, answer the following question:
Name a Doctor Who story which features music from Eric Siday’s "Ultra Sonic Perception".
Please send your answers along with your name, address and where you heard about the competition to comp-dual@doctorwhonews.net with the Subject "Space Age". The competition is open world-wide and the winners will be able to choose which composer and format (Vinyl or CD) to receive (please specify in your entry). Only one entry per household will be accepted. Closing date: 31st May 2014.
Tweet

Paul Shelley is 79 today - 4 credits, including Persuasion in Four To Doomsday

Roy Stewart (died 2008 aged 83) would be 96 today - 3 credits, including Toberman in The Tomb of the Cybermen
Deaths