The Mill has announced that its UK Visual Effects office is expected to close at the end of April due to a downturn in VFX requirements within the industry.

The Television and Film studio has been responsible for providing visual effects for Doctor Who since its return in 2005, and this week was nominated for a BAFTA 2013 Craft Award for its work on Asylum of the Daleks - the company has been nomimated every year since 2007 and won it 2009 for The Fires of Pompeii.


Announcing on Twitter yesterday the company said:
Mill TV has not been immune to the volatile trends present in film and television production. Therefore, yesterday we reluctantly announced a proposal to close Mill TV and are now in consultation with our employees about this proposal. Naturally, this is very disappointing: we have enjoyed a nine years of creating great work that everyone in The Mill is hugely proud of.
The Mill's CEO Robin Shenfield explained in a statement:
Mill TV has suffered a number of setbacks such as failing to join the roster on Starz/BBC production of DaVinci’s Demons and the cancellation of Sky’s Sinbad sequel. Going forward, broadcasters are commissioning less high-end VFX driven drama series this year, with Merlin discontinued and the BBC not commissioning a Doctor Who series this year.

I’m not feeling negative about film and TV VFX in the U.K. I think the work will return in both film and TV. We are just at a point of hiatus. While TV VFX has been less volatile than film - last year the U.S. studios spent far less than they did in 2011 - TV also seems to have caught the bug, and there have been less of those high-end commissions and repeat series.

We have reluctantly decided that this is a business we do not want to play in any more, although I am immensely proud of what we have achieved and we hope we will be able to redeploy a number of those people elsewhere in the group and are looking very hard at that.
As well as Doctor Who and Torchwood, the company has provided effects on a variety of projects, with television shows including Sea of Souls, Merlin, Sherlock, Primeval, Demons, Woolly Mammoth: Secrets from the Ice and the BBC's Where Next? promotion, advertising campaigns such as for Kia, Barclays, Blackberry and Tesco, and for films like 28 Weeks Later, The Damned United and Les Misérables.

CBBC show Cracking the Code recently visited The Mill to see VFX for Asylum of the Daleks: 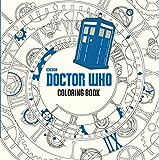 The Entropy Composition premiered on Radio 4 Extra in 2015 at 6:00pm BST

The Girl Who Died premiered on BBC America in 2015 at 9:00pm EDT, watched by 0.91 million viewers.
Birthdays

Patrick Ness is 50 today - 10 credits, including Executive Producer for For Tonight We Might Die(Class)

Mark Gatiss is 55 today - 60 credits, including Writer for Night Terrors

Timothy Combe is 85 today - 5 credits, including Director for Doctor Who And The Silurians
Deaths