The Sun's latest casting news reports that Gavin and Stacey writer/star James Corden will appear in the new series of Doctor Who later this year. The actor was said to have been seen learning his lines on train to Cardiff, and confirmed the news when approached by a fan.

The "show insider" said:
We normally keep our guest stars under wraps but you can't hide a bloke like James. He loves coming to Wales, and it gives him a chance to meet up with Ruth Jones, who co-wrote Gavin and Stacey with him and starred as Nessa. We're just delighted to have James on board. He is a great actor and he'll be a perfect fit for the new Doctor Who.
The actor's role in the series has yet to be revealed.
Tweet

"Out of this World"

The Royal Liverpool Philharmonic Orchestra will be presenting an afternoon of sci-fi music, which will feature music from Doctor Who, amongst other sci-fi favourites:
A fantastic adventure through Time And Relative Dimensions In Space as our very own Time Lord has close encounters with out of this world favourites from large and small screens.

The programme includes music from Dr Who, a musical tribute to Star Trek, as well as music from Star Wars. Mankind’s giant leap is remembered and we pay a visit to our nearest planetary neighbour with a movement from Holst’s Planets Suite. Come in your best outer space gear for a truly intergalactic experience!

Best of all - come to the Phil from 1.30 pm to meet all your favourite Dr Who and Star Wars characters!
The concert will be presented by Alasdair Malloy, a musician who's dedicated much of his life to promoting music to children; talking to the Liverpool Echo about the forthcoming concert:
It’s extraordinary. There’s no doubt the RLPO plays to more children than any other orchestra in the UK, if not Europe. For me I think a successful family concert should have all the same things as a successful family day out. Like a theme park for example – the moment you wake up the children are excited. Then the event itself should have all these elements of excitement and surprise and discovery. Then afterwards you have the shared experience as a family and with any luck you’re going to talk about it.

The concert is on the 7th March at 2:30pm at the Liverpool Philharmonic Hall - see their website for further information and to book tickets.
Tweet

Doctor Who for Central / Eastern Europe

BBC Worldwide have signed a deal with Sony Pictures Television for some 114 hours of entertainment to be shown across Central and Eastern Europe, including countries like Poland, Romania, the Czech Republic, Serbia, Slovenia and Montenegro. The package includes Doctor Who, Torchwood, and Primeval.

Says Eddie Nelson, GM of Sony Pictures Television's networks businesses in the region:
We are delighted to secure such a fantastic selection of BBC shows for AXN and AXN SCI-FI. The addition of these exciting new titles to our schedule further reinforces our channels’ reputation as the destination for world-class TV entertainment in Central and Eastern Europe."

The press release comes from the BBC Showcase event taking place in Brighton; the show enables BBC Worldwide to promote television programmes to potential buyers from around the world.
Tweet 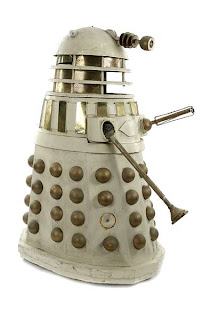 This Wednesday sees the Bonhams Auction of many Doctor Who costumes and props take place, and the auction rooms are now open for public viewing up until Tuesday. Entrance to both the viewings and the auction is by purchase of the auction programme, which costs £15.00 (£5.00 goes to the charity Children in Need).

Stephanie Connell, entertainment specialist at Bonhams said: "Doctor Who is without doubt one of the most important and best loved television programmes, and we are delighted to have the opportunity to offer some of the iconic costumes and props from the show."

As might be expected, the media is taking an interest in the auction, most of which revolves around the sale of two Daleks which featured in their last 'classic' story, Remembrance of the Daleks (MKI and MKII versions).

The BBC1 magazine programme The One Show is expected to run a feature on the auction on Tuesday evening, from 7:00pm.


For full details on the auction, including openings times for public viewing, see the Bonhams website.
Tweet

The actress Carey Mulligan - best known to Doctor Who fans as popular character Sally Sparrow from Blink - has won the Orange British Academy Film Award for Best Actress for her role in the film An Education. The 24 year old actress said: I was here a year ago and I didn't imagine in a million years that this would happen. I wish I could do a speech like Colin Firth and talk about fridges but I can't."

Mulligan has also been nominated for an Oscar in the 82nd Academy Awards taking place on 7th March.


The British Academy Awards are available to watch in the UK on the BBC iplayer until the 28th February.
Tweet

Part Two of The End of Time has debuted in Australia to good ratings. The special averaged 840,000 in the five major capital cities, again against stiff competition from the commercial networks, including a 20/20 international cricket match. It was up 40,000 viewers from Part One and was the ABC's top-rating program of the day, rating higher than the popular Sunday 7pm news.

The Sydney Morning Herald TV Guide has rated Part Two of 'The End of Time' its 'show of the week' with Michael Idato writing that it is 'is nearly but not quite the equal of the series's best episodes...it is, instead, a strange ballet of noise and movement, a super-charged run around the block set to the outstanding musical motifs of Murray Gold, which swirls around the simpler truth of the episode's purpose-to give Tennant's Doctor a final, glorious moment of universe-saving indecision and to serve up a helping of sentiment (with a side-order of tears) as he says a fitting goodbye to his life, as we know it, and the lives of those he holds dear.' Idato and Doug Anderson also rate the finale highly in their daily online video TV guide. Melinda Houston of the The Age is less kind, writing of the departure of Russell T. Davies that 'it's been a fun ride but [he] has an undeniable taste for high melodrama and while he's brought some welcome rough edges to the new-style time lord, and a wicked sense of humour, he's also brought a fair whack of sentimental emoting that's not always so much fun.'

Meanwhile, ABC Online's 'The Drum Unleashed' has an amusing blog comparing the different hosts of the long-running Media Watch program with various incarnations of the Doctor.
Tweet

Doctor Who for Easter

The new trailer for Doctor Who has now been broadcast, featuring a couple of the Doctor's old adversaries and some new ones!

The new series is scheduled to arrive on UK television screens during Easter 2010.

Every year, the Academy of Science Fiction, Fantasy and Horror Films hold the Saturn Awards; the 36th award ceremony will take place on 24th June, and Doctor Who has been nominated in a number of categories.

For the Best Television Presentation award, The End of Time is up against sister show Torchwood's Children of Earth. Other contenders include the new versions of The Prisoner and V, plus Alice and The Tudors.

In media, Best DVD Television Release sees both Doctor Who: Planet of the Dead and Torchwood: Children of Earth in the running, against Terminator: Sarah Connor Chronicles: The Complete Second Season, Primeval, Volume 2, Lost: The Complete Fifth Season and Life on Mars: The Complete Series
Tweet

The actor George Waring has died at the age of 84.

The actor portrayed the role of Arden in the Patrick Troughton adventure The Ice Warriors. Arden was a scientist whose team discover an "Ice Warrior" buried deep in a glacier, and ultimately becomes the Martians' first victim.

Born in Eccles, Lancashire, Waring made his career in theatre and then television, appearing in a number of notable roles in shows like Six Days of Justice and Mixed Blessings. However, he will be best remembered for the character of Arnold Swain in Coronation Street.

SeeSaw is the latest online streaming service to provide episodes of Doctor Who for viewing over the Internet. Stories currently available are The Space Museum, Tomb of the Cybermen, Planet of the Spiders, The Talons of Weng-Chiang, The Caves of Androzani, Mark of the Rani, and Survival.

SeeSaw's controller John Keeling says:
It's like having an enormous buffet... you can either just snack on it and catch up on what you've missed or gorge yourself with an entire season - it's absolutely at your fingertips and your control.

This is the tip of the iceberg, it feels to me like it did 20 years ago when I was at Sky and multi-channel TV was just beginning and you saw satellite dishes sprouting on people's homes like mushrooms

This way of watching television will be on TVs from this year. One of the fastest selling electronic goods is an HDMI cable which connects a laptop to the back of the TV and bingo, you're online and your TV has become an enormous monitor for your laptop.
SeeSaw joins existing streaming companies BlinkBox and MSN in providing Doctor Who stories online.
Tweet

Reset premiered on BBC Three in 2008 at 9:52pm GMT, watched by 0.85 million viewers.
Birthdays
Tip Tipping (died 1993 aged 34) would have been 63 - 2 credits, including Stunt coordinator for Remembrance of the Daleks

Max Faulkner (died 2010 aged 79) - 12 credits, including Stunt Man in The Ambassadors of Death