Australian writers reflect on Doctor Who 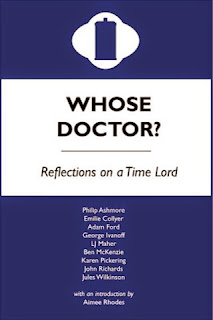 In Whose Doctor? Reflections on a Time Lord, a new independently released ebook, nine Australia writers examine their relationship to Doctor Who from all angles. From letters begging to be allowed to write for the show and poems about step-families bonding over mutual love of the Doctor, to examinations of how New Who subverts the male gaze and introductory lectures to aspiring companions, this collection presents a range of unique and personal takes on Britain's favourite and longest-running science fiction TV show.
Authors in this collection include:
• Screenwriter/podcaster/playwright John Richards (Outland, Splendid Chaps, Songs for Europe)
• Feminist commentator/founder of Cherchez La Femme live talk show Karen Pickering (the Guardian, the Age, Crikey, New Matilda)
• Comedian/podcaster Ben McKenzie (Dungeon Crawl, Ben McKenzie is Uncool, Splendid Chaps)
• Author/playwright/poet Emilie Collyer (The Good Girl)
• YA Author George Ivanoff (You Choose, the Gamers trilogy).
According to the publisher:

These writers are poets, comedians, scriptwriters, academics and authors, but above all they are each, in their own way, fans. As someone once said, "There's no wrong way to be a fan of Doctor Who." This collection proves that point beyond a doubt.

The pieces in this collection were originally performed live on stage in Melbourne at the Lithuanian Club on 13 November 2013 as part of the City of Melbourne Library's "Not Quite the Big Finish: An Evening of Doctor Who Spoken Word", a 50th Anniversary celebration of Doctor Who.
Whose Doctor? Reflections of a Time Lord is available now for $US5 as an ebook from SmashWords and Tomely. For more information check out #WhoseDoctor on Twitter.
Tweet

Nicholas Briggs is 59 today - 681 credits, including Dalek Voice in Victory of the DaleksTony Virgo is 72 today - credited as Director for The King's Demons

Isla Blair is 76 today - 2 credits, including Isabella Fitzwilliam in The King's Demons