The Seeds of Death on UKTV

Sunday 24th February sees the broadcast of the six-part 1969 Patrick Troughton story The Seeds of Death in Australia and New Zealand. The story is the eighth instalment in the 50th Anniversary season of classic Doctor Who stories on the UKTV channel.

It is scheduled in New Zealand at 3:10pm and in Australia at 3:30pm. New Zealand has an additional screening on Monday 25th February at 3:10am. 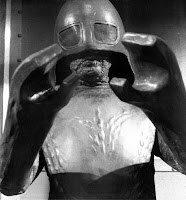 The Seeds of Death was first broadcast in Australia in 1970. New Zealanders had to wait until 1988 to see the story when it was first screened as part of TVNZ's Doctor Who 'Silver Jubilee' celebration marking the 25th anniversary in November of that year.

UKTV is showing a story every week throughout the year in the lead-up to the anniversary in November. The Seeds of Death concludes a month of Patrick Troughton adventures.

Next week UKTV shifts its focus to Jon Pertwee's Doctor and the colour era of the programme, beginning with Spearhead from Space on 3rd March.

Up-and-coming broadcasts from both 20th and 21st Century series of Doctor Who can be found via UKTV's Doctor Who sections for Australia and New Zealand.

The Abominable Snowmen: Episode Five premiered on BBC One in 1967 at 5:24pm BST, watched by 7.20 million viewers.

Matt Smith is 38 today - 105 credits, including The Doctor in The End of TimeJeffrey Stewart is 65 today - credited as Dukkha in Kinda

Edmund Bailey (died 1982 aged 78) would be 116 today - 2 credits, including Councillor in The Time Monster
Deaths