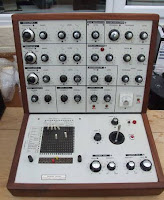 John Baker worked for the BBC Radiophonic Workshop between 1963 and 1974, during the time when many special sounds for Doctor Who were made by the department. The auction site Ebay currently an EMS VCS3 synthesiser listed which was owned by the composer, and it has been reported as being used for Doctor Who, and possibly even used for the re-arrangement of the Doctor Who theme tune in the early 1970s (though this has not been confirmed).

The item has, unsurprisingly, attracted interest, with the bid at the time of writing at £3877. Running until 4th March, you can view the item on the auction website.

Peter Capaldi is 63 today - 67 credits, including The Doctor in Dark Water / Death in HeavenBrian Cullingford is 84 today - credited as Perkins in Fury From the Deep

Terrance Dicks (died 2019 aged 84) would be 86 today - 44 credits, including Script Editor for The Invasion

Kenneth Cope is 90 today - credited as Packard in Warriors' Gate