Nothing at the End of the Lane have just published Farewell Great Macedon, a 258-page, A4-sized, perfect bound softcover book, available for order exclusively via themselves. Details below: 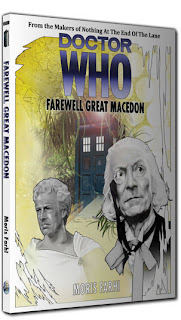 In early 1964, when Doctor Who was only a few months old, actor and scriptwriter Moris Farhi, under the guidance of script-editor David Whitaker, wrote a six-part historical adventure entitled Farewell Great Macedon, detailing the Doctor’s encounter with Alexander the Great in the ancient city of Babylon.

Nothing at the End of the Lane is proud to present, for the first time ever, the complete script of this unproduced Doctor Who story in one special-edition volume. Covering over 250-pages, Farewell Great Macedon not only reproduces the original script pages for all six episodes, but also features:

»Foreword by Moris Farhi.
»The history and development of the Farewell Great Macedon script and Moris Farhi’s association with Doctor Who between 1964 and 1977.
»Reviews of the story by Jeremy Bentham, Paul Scoones and Philip MacDonald.
»A special edition of DWM’s Time Team.
»A historical examination of Alexander the Great’s life and death compared with that seen in Farewell Great Macedon.
»Stunning new artwork by Jason Fletcher and Adrian Salmon.

This special edition also contains the one-episode tester script, The Fragile Yellow Arc of Fragrance, written by Farhi for David Whitaker at a time when the Doctor was still halfway though fighting his first on-screen battle with the Daleks.
Tweet
FILTER: - Merchandise - Books