The Mind of Evil - recoloured 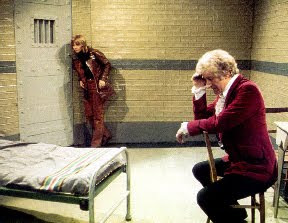 Posters on the Gallifrey Base discussion forum report that it was announced at this weekend's "Regenerations" fan convention in Swansea that the 1971 Third Doctor adventure The Mind of Evil has been restored to colour for a forthcoming DVD release. Like a number of stories starring Jon Pertwee as the Doctor, the colour master videotapes for this six-part story were junked by the BBC in the 1970s. This left only black and white film recording copies of the episodes, made for overseas sale, in the archives. A small handful of colour clips survived on a domestic videotape recording of a transmission of the story in the United States, and were used to restore colour to scenes as a bonus feature at the end of the 1998 VHS release.

No detail has yet emerged of whether the full story has been recolourised for this DVD edition, nor for when the disc is scheduled for release. It is also not currently known whether the episodes were restored to colour using the chroma dot technique employed on the similarly-afflicted third episode of Planet of the Daleks in the forthcoming Dalek War box-set, or whether they were restored from scratch with artificial colour.

Actor Nicholas Courtney, who appears in the story as the Doctor's ally Brigadier Lethbridge-Stewart, is also reported to have participated in an audio commentary for the release.